It’s St Patrick’s Day today and all those pictures of leprechauns brought back a memory. You see, when I was nine, I saw a …

Well I don’t know what he was exactly. He could have been a leprechaun I suppose but that seems unlikely since I saw him sitting near a bridge in South Wales. However, he was very small and very definitely of the elven type.

On the other hand, I lived ten miles from Banwen, where St Patrick was allegedly born, so possibly he was a leprechaun tourist doing a road-trip.

À propos of nothing, the town and the schools I attended were named after a different saint, St Catwg, who was less worried about snakes than St Patrick. We lived off what is called the ‘Heads of the Valleys’ road, which perhaps gives you an idea of how far from the beaten track we were. Banwen was even further into the wilds and from what I recall, the Banwen kids who came to our secondary school were teased about being unsophisticated by those of us who lived closer to what we thought of as civilisation (there was a Wimpey bar three miles away). Trust me, none of the rest of us had a cosmopolitan or sophisticated leg to stand on, but that’s teenagers for you. At least the Banwen kids had a patron saint to be proud of, even if he’d emigrated. The rest of us had nothing. Even St Catwg had travelled up from Monmouthshire and thence left our place for Brittany and possibly Scotland.

Going back to my elven man – I was as I said, around nine. He was ageless. I had been communing with the river which ran along a gorge fifty yards/metres or so behind my house. This means I was troubled or unhappy or or being bullied or lonely or a mixture of all of those. I can’t remember the reasons but can remember the emotion. One of my ‘places’ was the river and I would stand on the bridge that crossed it and talk to the lights which sparkled on it under the trees. I don’t recall the sparkling ever not being there, even though I also remember it raining for months. This either means I only visited it when it was dry or there was something unusual about the place.

The path to the bridge on our side ran down the length of gardens and then a field and then there were some rather rusty railings which were designed to stop people (children) from getting to the edge of the gorge and falling into the river. Naturally, they had long since been bent so that a child could get through. It was possible to climb down to the river’s edge and stand on a sandbank. This was where I observed the river beasties, while I still had ideas of becoming a naturalist.

That particular day however, I’d just walked down to the bridge, poured out my worries and was returning home. As I stepped from the bridge onto the path, I saw a small man, cross legged on a post, smoking a pipe. He was quite serene, saying nothing but giving me a small nod and smile as if to say ‘it’ll be all right.’

Being well brought up I said ‘hello’ and passed on. A second later, the penny dropped that this small man was actually smaller than me, smaller than my little sister, small enough to sit on a post in fact.

I turned and he was not there. Or he was gone. Whichever one prefers to think.

I’ve never really told anyone of this, because after all, it sounds a bit bonkers. I never saw him again, nor did I ever see any other elvish type, despite feeling they were there just out of sight. Ultimately I grew out of talking to the river and trees but never quite lost the sense that there was some other world just beyond. I am an educated woman of faith but I fundamentally feel that the universe is infinitely more complex than a mere human who might live seventy years or so can ever codify.

Those who know about Celtic mythology talk about another world which touches ours and scientists talk about alternative universes. I think of those moments under trees, I think of other moments when I clearly knew I could go one way or another and the outcome would be hugely different and I wonder.

Of course, I could just have been bonkers. I was immensely stressed aged nine.

On the off-chance that he really was an elf, I’ve done a bit of research into things about which I’d have known nothing then. I was an English outsider in a Welsh village but actually I doubt many of my Welsh contemporaries knew either.

‘The Ellyllon are pigmy elves who haunt the groves and valleys. They dine on poisonous toadstools and fairy butter, which they extract from deep crevices in limestone rocks. Their hands are clad in the bells of the foxglove, the leaves of which are a powerful sedative. They are sometimes kindly, sometimes menacing and almost always mischievous.’

So I’m going to own my elf as one of the Ellyllon – a kindly one.

It was a long, long time ago of course. I only really recall the sense of calm and an unspoken wisdom that said ‘it’ll be all right.’ So he could, depending on your view point have been an elf, an angel, a manifestation of my internal determination to win through or a manifestation of stress.

Whichever he was, he made me feel better. I somehow knew I’d never see him again, but it didn’t matter.

At that moment, I felt comforted. 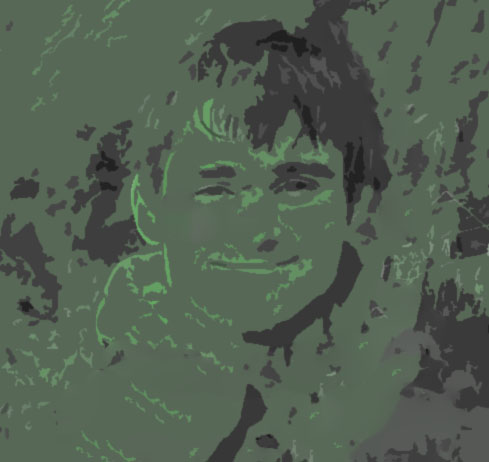 3 thoughts on “Under the Green”