I was neither a tom-boy nor a girly girl. I liked hand-crafts, skirts and being fairly clean but I also liked climbing trees, making shelters, building things, doing experiments. I yearned for a train set and chemistry set. But I was a girl so I was given dolls.

The first one was called Tilly, with a soft body but plastic hands, feet and head. Tilly with her mocking eyes and snarky grin (as if she’d laugh at you and then bite you) was discarded quite early. But never mind, her real-life manifestation has popped into my life at regular intervals ever since.

By the time I was six or so, I had accumulated three archetypal little girls’ dolls of the era. Mine were called Jane, Sarah-Jane and Susan.

Jane had a no nonsense mouth, dark brown eyes and long curly dark brown shiny hair; definite, determined. No-one would push Jane around. Everything about me was indeterminate. My own grandmother thought my eyes were green until I was twelve and my hair colour slowly darkened from light mousy to dark mousy. Most people pushed me around.

I was jealous of Jane, she was exactly how I wanted to look and be.

I wasn’t jealous of Sarah-Jane. She had short blondish curly hair and blue eyes and looked very ordinary and a bit dull.

Susan’s skin was brown, her eyes dark and friendly, her short curled hair lusciously black. I don’t know why I called her Susan. It’s my middle name but then, at the time, every second girl was called Susan too. All the same, she was my favourite.

Being a little unnerved by Jane and feeling that somehow it would not bode well for me if I treated her with less than respect, I took good care of her and smoothed her lovely hair and sat her in the nicest places.

I used felt-tip pens to draw eye shadow on Sarah-Jane. But all attempts to make her a femme fatale failed exactly as they did when I tried on myself later. Perhaps because both of us were shy and a little bit prim, no amount of make-up can stop those two things from shining through any attempts at glamour.

Poor Susan. I loved her so much but one of her eyes fell inside. I heard about a dolls’ hospital and begged for her to be taken there but it was too expensive they said, not worth it they said. So she remained half blind but lovely.

My little sister felt quite differently about her dolls and was devoted to them. Here I have to admit that I was perhaps a tiny bit mean to her. If we played hospitals, my little sister’s dolls were the ones who got wounds drawn on them with felt tip, whose heads were bandaged, who accidentally fell down staircases.

My grandmother knitted clothes for all our dolls, including knickers. I swear she once knitted us some knickers too but my mother says I’m wrong. False memory or not, I can still feel the scratchy lumpy sensation of garter stitch on buttock. If Mum is right, then perhaps it is the only time I connected with the dolls themselves – felt their discomfort, personified them.

Because I really wasn’t a dolly person. I didn’t have tea parties for them or talk to them or make up stories involving them. The dolls were no more alive to me than a chair was. I didn’t really know what to do with them, although admittedly, I knew what to do with my sister’s.

As a child, I confided in trees and the river and wrote poems. As a teenager, I poured my heart out on the cat (who was unimpressed and ran off if there were too many tears) and into an angst ridden set of diaries. I wrote even worse poems.

So I grew up and forgot the dolls. When I had children of my own, times, if not marketing had changed. My son and my daughter both played equally with dolls and cars and train sets and made cakes. But I don’t think their toys were alive for them either, except when they were feverish. (And we won’t talk about the doll an aunt gave my daughter which my daughter swears could – and did – turn its own head. We sold it to a sweet little girl at a jumble sale for £3 a few years later and both felt very guilty…)

I write and my son composes music and my daughter makes art. Perhaps we don’t need to personify objects because we have minds full of other worlds.

Many years ago, my parents downsized from the family home to a bungalow. When I say “downsized”, it was only in the sense of available capacity not actual stuff (to read more about this, read A Fine Mess). When later, my widowed mother moved to live near me, the “stuff” had to be drastically reduced. Aware of my father’s shade tutting as we sorted, I found a box. On its end was a picture of its contents: loathed school shoes. I opened up the box with trepidation. There was really no telling what my father could have stashed in it. This was a man who managed to get half a five pound note stuck in between two books and who had preserved in perspex surgical stitches taken out of my chin and had wanted to do the same with my tonsils.

The lid came off. Staring up at me was Jane. She lay, stark naked, on a pile of tissue. As beautiful as ever, with long dark curls and determined eyes, she glanced at my hair as if to say “Ha! You’ve got to colour yours now.” But despite her eternal youth, she didn’t look pleased.

“How could you leave me here alone all these years?” she telepathed.

I closed the lid and put it on the charity shop pile. She could make some other little girl feel inadequate.

No, I never understood the personification of dolls, but I swear, as I handed Jane over to the shop the next day, a little voice snapped through the cardboard: “you could at least have put some knitted knickers on me first.” 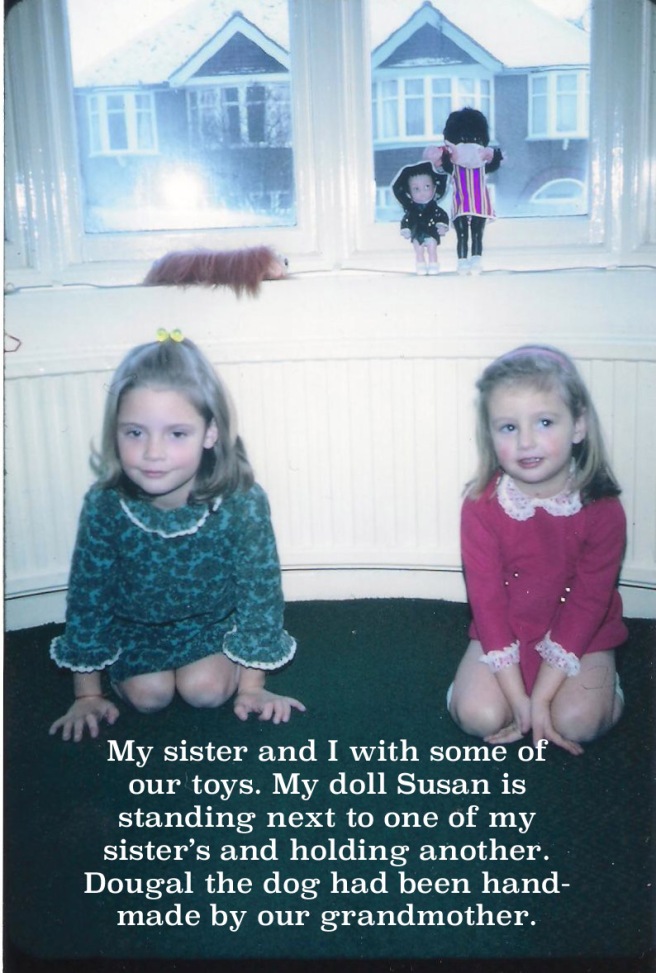 7 thoughts on “Jane, Sarah-Jane and Susan – a tale of jealousy, blindness and knitted knickers”