Waiting, half consciously
for the next harsh sounds of fighter
to cross my sky,
a speck of black, slow moving,
catches the corner of my eye.
I, shuddered to sudden movement, see
a blackbird gently winging,
faster than seemed possible
to leafless trees, jaggedly finger-streaked on grey.
The bird alighting like a smudge,
so still and yet..
Is this the tight silence before the storm?
The blind, drugged blackness before the dawn?

Somewhere people weep
while others serve up a dish
made of retribution and revenge,
saying as their grace:
“it was the right thing to do,
we’d do it again. Amen.”
In the name of the many
the few decide to line us up
on the crumbling edge of war;
shaping us into an entity for the history books.
A few thousand miles away
eighty percent agree and thank us
for our co-operation;
while we enumerate the targets:
Freedom’s fodder
and wait.

Yesterday we shivered as we spoke.
Today, loosening our fingers we say
“Yesterday was terrifying”
but tighten our fingers again
as, hidden by clouds,
invisible machines
test their wings in waiting. 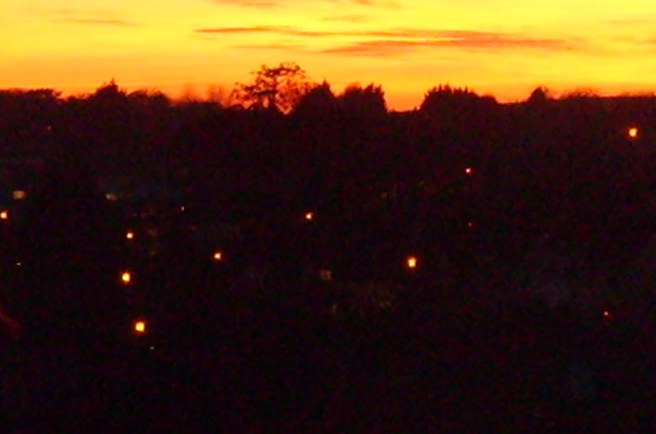 I wrote this nearly 31 years ago, the day after the bombing of Tripoli. I can remember what triggered this, as I looked up from washing up in a cafe and out of the window, afraid that the bombing in Libya would escalate. I’d like to pretend 31 years was before I was born but actually I was a very young adult starting out in life, despairing at what was happening in my world and potentially in my name. This may not be the best written poem but it was heartfelt. How sad that as my children enter adulthood, nothing whatsoever has changed and the threats they face in fact may be directly connected.