I have been very lucky with my mother-in-law. She treats me exactly like the daughter she wanted but never had, loving me, spoiling me, supporting me and periodically telling me to shut up when I’m talking nonsense.

One of her best attributes is that she never ever criticises the abysmal state of my house-wifery and says as long as I provide her with lovely home-cooked meals when she visits and she has a comfortable bed to sleep in and a book or three to read, a glass of wine and some lively conversation, she is never going to complain about anything as irrelevant as dust.  I happily manage my side of the bargain.

She quite appreciates, I think, the fact that after all years living in a male dominated home, she now has an ally. In general, she’s happy to gang up on her own son in my defence, although she says his failings are now my responsibility as he’s now been with me longer than he was with her. I say that Aristotle said all the damage is done by the time a child is seven, so it’s her fault. This is the sort of moment she tells me to shut up.

Several years ago, in my lunch-break, I started writing out a scene in a Romano-British home where a daughter-in-law is enduring the insults of her loathsome mother-in-law. I thought at the time, it might form part of a novel written along the same lines as a Golden Era country house murder mystery. You know, the sort where pretty much every character is a suspect yet somehow indifferent to the mayhem around them. (‘Oh goodness Papa is dead. Does anyone else know where the key to the drinks cabinet is?’ – that sort of thing.) Well, I developed this idea eventually and now MURDER BRITANNICA is finally for sale. It has plenty of murders, a lot (I hope) of merriment and a monstrous mother/mother-in-law Lucretia. I really enjoyed writing Lucretia. I have no idea on whom she’s based, although I’ve met plenty of bullying women in my time. She’s certainly not based on my mother or mother-in-law – they are the basis of two of the other older female characters: enigmatic Tullia and practical Tryssa.

While looking for a cover picture for the book I came across the one below (although I didn’t use it in the end). I like to think that these are the three younger women who have to endure Lucretia as her schemes unfold. Seventeen year old Camilla has pinched her brother’s lyre (although she has no idea what to do with it) and is considering how awful it must be to be as old as Poppaea (who’s twenty-five) or Prisca who is thirty-something. Prisca is thinking of gladiators and Poppaea is wondering … well no-one ever quite knows what she’s wondering.

The men (and there are quite a few of them too) are probably looking for food because there’s a bit of a culinary crisis going on.

I hope if you read Murder Britannica, you’ll enjoy it as much as I enjoyed writing it. It was great fun. And I’ve dedicated it to my mother-in-law because she loves murder mysteries and is NOTHING like Lucretia. 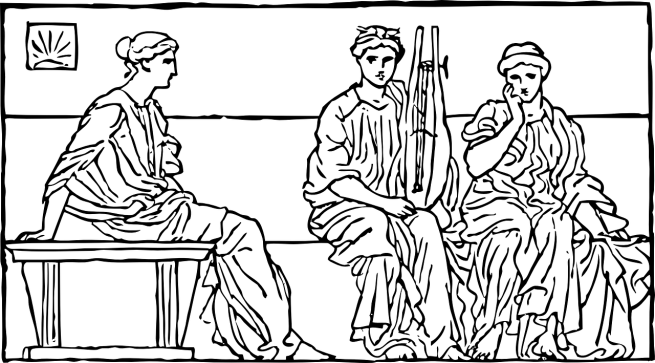 Words copyright 2018 by Paula Harmon. All rights belong to the author and material may not be copied without the author’s express permission.