Often wondered how scriptwriters and comedians work on scripts together? Me too. Who gets to decide whose joke or line goes where and has an equal voice?

I think I was six years old the last time I collaborated creatively outside work.

Two of us drew a mouse. We decided to do half each. This way we could be proud of our part yet share in the glory of the overall effect. I drew a lustrous tail and beautiful furry haunches. He got the eyes and whiskers. Or maybe it was the other way round. Either way, no one could see the join (although if that mouse had ever come to life there might have been trouble).

Well that was a long time ago and I never expected to collaborate creatively outside work again.

Then I met other writers on Facebook and a strange thing happened. I started to discuss writing with people I’ve never met and share ideas which up till then were hidden in my head.

One day, during a message exchange, one of them mentioned collaboration.

Liz Hedgecock is author of a number of mysteries, many set in Victorian London. I love her stories and was flattered to be approached.

Both of us work and have families. We live a fair distance apart. A hazy plan to do something in Autumn 2017 came apart when we both decided to do NaNoWriMo in November. With the best will in the world we realised it was impossible to start something new before Christmas.

Nevertheless, we sketched out via messenger and email two unlikely Victorian female detectives: young women determined not to let the restrictions of corsets and decorum stop them from solving a crime.

We set a date to discuss the logistics on 19th January. If this all sounds very formal, it’s because we’ve never actually met in person. I shuddered at the thought of a video call, but fortunately so did Liz.

So we talked via cyberspace and plotted.

I had been nervous. What if we didn’t get on?

But it was fine. We were chatting like old friends in no time.

With a working title of The Case of The Black Tulips, our story was born.

So how are we collaborating? We decided on an approach which gives us equal input and voice. We have a character each and tell the story through ‘our’ person alone. It is like a very complex game of consequences, especially when Liz changes tack and I have to alter direction myself. Are we mad? Probably, but it is tremendous fun.

We’ve got so caught up in it that we are nearly half way through the first draft already with ideas of sequels forming. Watch this space if you like mysteries and feisty female leads because we hope to publish later this year.

I often tell people that I started writing stories because I wanted to have adventures like children in books and it was the only way to do it. I’m still writing for the same reason. My new character has found a friend and is having a wonderful adventure.

And the same is true for me.

Put Down The Embroidery, We’re Going In 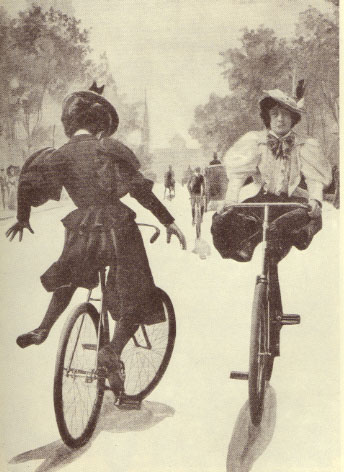 Words copyright 2018 by Paula Harmon. All rights belong to the author and material may not be copied without the author’s express permission

5 thoughts on “Venturing Out”