The old court building stands on a corner in Victorian elegance. Although relatively small for a civic building, from outside it is rather grand. Once, it must have been modern. No doubt, it was there were complaints in 1882 when it was built in the midst of the surrounding Georgian splendour.

I started working there in 1989, an incomer with no connection – or so I thought – to the town or county. I was startled to discover many later that one of my great-grandfathers had been born maybe a hundred yards away and the office was probably being built just as he was setting out into the wide world beyond his little country town.

I met my husband in that office and worked there on and off for ten years.

On hot summer days, diagonal shafts of sun could just about reach through the railings on the pavement to slant into the staff-room in the front part of the basement. Little light could penetrate into the ground floor office where we actually worked. High filing cabinets ganged up in lumpy, grey, bureaucratic hostility to block the peeling cobwebbed frosted Victorian windows, and in a pre-clear-desk-policy, pre-digital era, on top of the cabinets was filing. There was filing everywhere: under desks, on shelves and piles of out-of-target work toppled from towers of files inside the walk-in safe. I swear we spent more time rifling through them looking for things and getting filthy in the process than actually working.

On wet winter days, the paper curled up in the photocopier.

There was a small door for staff at the side of the building and a grand set of double doors up a wide staircase at the front for the public and professionals. It took them into a tiled foyer from where they could go straight ahead to powder their noses or, if they had the means to open it, access the stationery cupboard. More normally, they would turn right to hassle us at the public counter or turn left and ascend a wide, sweeping staircase to the courtroom upstairs.

Everything was solid and oaken. The Victorian office keys were heavy enough to kill someone with.

Inside our filing cupboards there was a ledger going back to 1882. Other old ledgers were in the basement archives but this one was still in use, commencing in perfect elegant copper-plate and ending with my best efforts in biro and my colleague’s felt-tip scrawl.

The interior of the building was grubby and tired. The oak finishings were dusty and dented, the coloured floor tiles chipped and dull. The beige carpet in the office was unimproved by spilt tea and we sat on unergonomic chairs covered in flowered nylon.

Then there was the basement.

We got there down a twisty narrow staircase near the staff entrance. It was so awkward that when it was your turn to make tea, you carried the mugs in a basin rather than on a tray because you were less likely to spill anything. The staff-room and kitchen had windows from which you could look up onto the pavement. There was a filing room across the corridor with windows onto a pointless sort of courtyard.

But the back part of the basement had no windows.

Another door off the corridor opened into a sort of cave in which the archived filing and ledgers dwelt. Public sector spending did not extend to adequate lighting for it. A couple of spider encrusted 40 watt bulbs cast circles of yellow gloom. Right at the back of the cave lurked a locked room in which the really, really confidential files were kept. That was even darker and danker. Fungi grew on ledgers in the corners. I have never smelled as bad as when three of us had to do a file audit in that room, breathing in goodness knows what spores and miasma.

The staff was divided about the basement. Half of us thought it was dark, horrible and damp. The other half thought it was dark, horrible, damp and haunted. Despite the fact that my husband is sensible and cynical and I write stories about the fairy who mangles my laundry, I was in the ‘don’t be silly’ camp and he in the ‘haunted’ camp. Some people refused point blank to go down for an old file unless someone went with them. One or two wouldn’t even go into the staff-room kitchen on their own. A story circulated that when it had been refitted, one of the workmen walked off site when he left it neat and tidy for five minutes one evening and came back in to find all the cupboard doors and drawers open. Even I, who didn’t think it was haunted, propped the door of that dark room open, telling myself it let in more light and I don’t think I ever went into the cupboard at the back alone, on the grounds that the main door might slam and lock me inside.

Although the basement had once been the home of a series of caretakers, as far as we know none of them had died there. It wasn’t the kind of court which had ever had cells. There were no old legends about it. So who was supposed to be haunting it, no-one knew.

It just, in the words of Terry Pratchett, ‘boded’.

Eventually, long after my husband and I had moved elsewhere, the staff and the work were moved out to merge with another, more modern court. I have no idea what happened to the mouldy files from the lurking cupboard but hope if they weren’t burned, they were put in some kind of bio hazard facility.

The beautiful if neglected old building lay empty. And then it was bought up, refurbished completely and turned into a restaurant. My husband and I went to a small reunion there a month ago with a few of our old colleagues. It was quite jaw-dropping. All the oak was polished and gleaming, the rooms were full of soft light, the tiles on the floors shone. The courtroom, which had been dull and cold, was glorious, almost golden. It was all beautiful.

We walked around pointing at things, to the bafflement of the other diners.

‘Wasn’t that where you used to sit?’

‘Did this room really have a fireplace in it?’

‘I hear the restaurant workers think the kitchen’s haunted.’

‘Who knew the windows were that big?’

‘Shame it didn’t have a bar in it when we were here.’

‘Have you seen the other staircase?’

‘The other staircase to the basement.’

It was true. In the foyer, where the public loos and stationary cupboard had once been, builders had uncovered a long forgotten staircase. It followed the curve of the one leading to the courtroom and descended into the basement – into the dark part of the basement. But it was no longer gloomy and creepy. Instead there were modern restrooms: clean, airy and stylish. There was no trace of that dimly remembered archive room whatsoever.

My husband and I took photos galore and reminisced with our friends over an excellent meal in Victorian opulence. The old building seemed to be saying ‘see what I look like when someone loves me?’

A few weeks later, he and I were still arguing over what the basement had looked like back when the two of us were working there. Eventually the other Sunday afternoon, we sketched it out on a piece of paper.

‘Here was the staff staircase.’

‘And this is where the staff loos were.’

‘And this was the staff-room and the kitchen bit was round here.’

‘And then there was a sort of side corridor that went to the filing room with the window.’

‘Not sure. Was it? Anyway, what about the other room? The haunted one.’

We drew and redrew and bickered for a bit and then when we thought it was just about right, tried to work out where the ‘new’ staircase came down and how the refurbished layout related to what had been there before. This discussion (argument) lasted quite a while. In the end, we both got our phones out to compare photographs.

Neither of us had any.

We scrolled through and compared photos we’d taken of the staircase itself, the courtroom, our colleagues, paintings on the walls. But there were none of the basement. Not one.

So the question is, did we think we’d taken photos which we hadn’t, busy catching up with old friends or did the ghost of the basement wipe them from our phones?

And if so – what, after all this time, is he hiding? 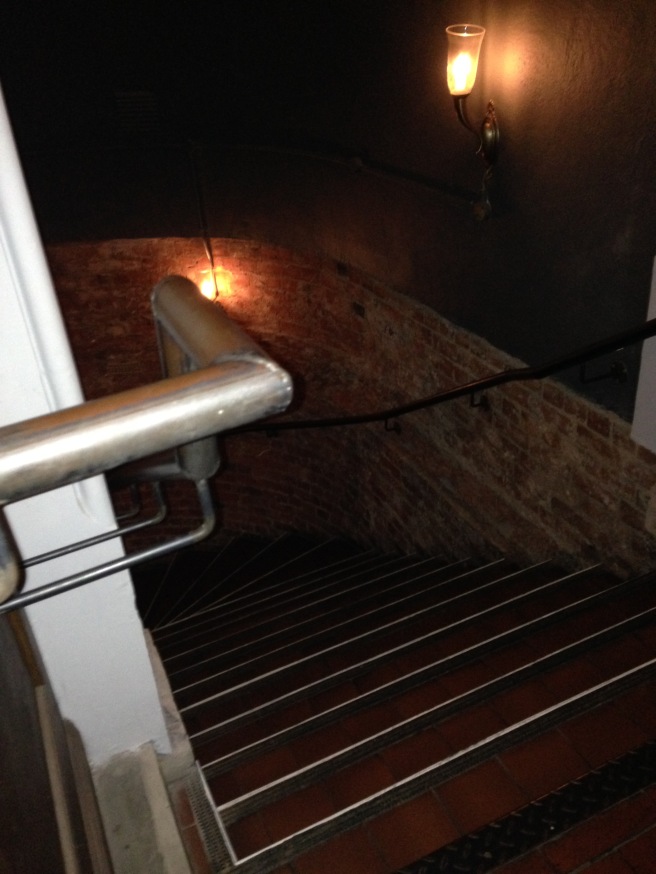 Words and photograph copyright 2018 by Paula Harmon. All rights belong to the author and material may not be copied without the author’s express permission.

8 thoughts on “A Staircase”