went on a resolution quest perhaps? Well these are mine:

Number One – this is the important one: Do not to try and do forty things at once all the time. (I’m thinking of my personal life. Multi-tasking is sort of what I’m paid to do it at work.)

In private however, I must not try to reorganise four bookcases, sort laundry, cook dinner, argue with teenagers/husband/self, find that thing and reorganise furniture in my head all that the same time.

In particular, I must not try to juggle a ton of writing projects. I think there was one month last year when I was writing and/or revising four different projects. If they’d been all set in the same era it might have helped, but as one was Victorian, one in the 1950s, one in the second century and who knows what the other thing was, because I’ve forgotten, it’s no wonder I came out of that month feeling frazzled and wondering where the fun had gone.

This morning, I finished the first draft of the yet unnamed sequel to Murder Britannica. It’s set a year later (AD 191) and the action has moved from a fictional village in what is now north of Cardiff, South Wales to the very real town of Durnovaria. Dorchester, which is not far from where I live, is built on its remains but the Roman town is not terribly visible. Which then leads on to the next resolution:

Two: Do lots of research but don’t disappear down research rabbit holes. As far as MB2 (as it’s currently called) is concerned, this has involved looking up Roman recipes and realising that the majority actually look very nice and wondering if I could cook them (although probably not stuffed dormice, flamingo or barren sow’s womb). For an entirely different project, I’ve also found out that Bristol Basin in New York is actually built from actual chunks of Bristol. For a third one, I discovered that the word ‘knickers’ for female underwear was not current in 1892. Actually, I’m going to ignore resolution number two. It’s much more fun going down the rabbit-holes.

Three: Keep being brave. At some point in my past, I decided that I wouldn’t let myself be ruled by what makes me anxious or afraid. There are too many of these to mention, so I won’t. One of the things about getting back into writing as an older person is writing about people over thirty having fresh starts. While the sequel to Murder Britannica is a light hearted murder mystery, the underlying theme is, I suppose, ‘looking back versus looking forward’. The younger women (both under twenty) are on the threshold of an adult life which is likely to be restrictive unless they do something about it. But the older women (well over forty-five), have all sorts of reasons to find out if there is more to their later years than weaving. Is there? Oh yes.

Four: only keep the clutter I love. Admittedly I’ve actually obtained two ‘new’ bits of clutter since Christmas. One is a – actually I have no idea what it is, a sort of compass I think – but I like to think of it as a time-machine and the other is a 1904 folding camera. I like to think of them as prompts, or even props for my writing and they’re in a cupboard so shouldn’t get too dusty (major advantage). All the same, this year, I’m determined to finally empty the attic when it’s neither too cold nor too cold (April & October??). I know the attic is full of tat. I know there’s even got a box labelled ‘stuff from under Matt’s bed’ which we sealed up when we moved in 2004. I know, I know – I say the same thing every January but maybe this year at long last, I’ll actually do it.

In the meantime, the long overdue decluttering has at least resulted in clearing out those kitchen drawers where everything has been stuffed for the last thirteen years. This led to the discovery of Napoleon and a dinosaur who were nestled with a gorilla in amongst a hundred dried up felt-tip pens and a few rogue Cub-Scout/gym club/swimming club badges that I’d never got round to sewing on anything.

Sooner or later, I’ll decide what Napoleon is doing and where he’s going. In the meantime, he and T-Rex have been reprieved and are back in the drawer.

Of course, if you have some ideas about their adventures feel free… 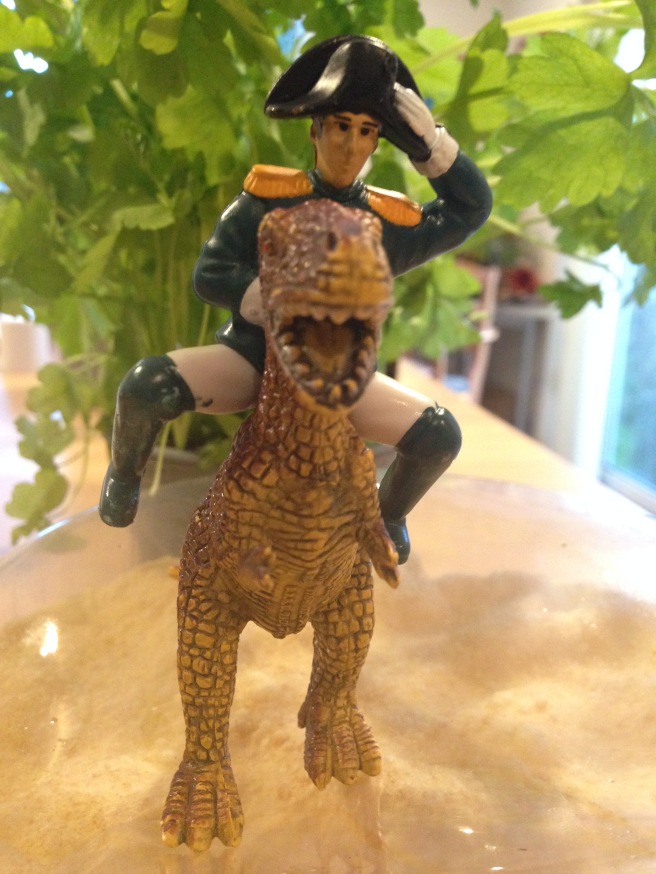